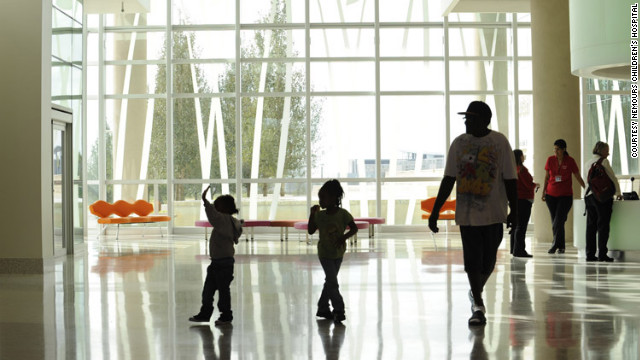 (Parenting.com) — Timber Branagan preferred the orange light. No wait, the green light. Oh, and the red too.

“I loved all of them!” the 6-year-old says enthusiastically. Choosing a custom color for her hospital room was one of Timber’s favorite perks at Nemours Children’s Hospital, the new 60-acre health campus outside Orlando. Her mom, Andrea, adds that her daughter preferred the purple light at night.

Timber also made full use of the 10,000-square-foot garden terrace on the fourth floor. She was admitted with a mystery illness, having suffered through six weeks of debilitating headaches that left her sleeping 18 hours a day. By day three of her six-day stay at Nemours, the physicians had it figured out: encephalitis, or swelling of the brain.

By day four, she was racing her older brother around the terrace’s 40-year-old, 6,000-pound live oak.

Set amidst a wooded expanse of central Florida, with theme park roller coasters peppering the horizon, Nemours Children’s Hospital is arguably the new high water mark for pediatric care in the United States. It’s a hospital that believes nature — and its healing properties — is as valuable as any IV or pill.

“Hospital in a garden” is how chief medical officer Dr. Lane Donnelly describes Nemours, which opened October 22, 2012. It’s a concept underscored by the many nature-centric touches.

The floor-to-above-ceiling windows flood the rooms and public spaces with natural light, not dull fluorescence. The two rooftop terraces feature obstacle courses and walking paths. The one-acre discovery garden is built around the senses: Fragrant flowers bloom in the section dedicated to smell; a few steps away, the ears are engaged by xylophone benches and percussive art.

It’s all part of a budding trend in medical care, one that believes nature can speed up the healing process, particularly with children, where the stress of hospital stays can be much greater. (Nemours eliminates stress wherever it can. Donnelly points out that the hospital room ceilings are matte, not metallic or glossy like most medical facilities. “When the children are in bed, they don’t like to look at themselves attached to tubes and machines,” he notes.)

This “it’s what’s outside that counts” philosophy first gained attention in 1984 with Robert Ulrich’s pioneering “window view” study. Surgery patients at a Pennsylvania hospital were assigned to two types of rooms: One had a window facing a brick wall; the other faced a tree-filled landscape. The study found that the patients with the verdant view healed a day faster, needed less pain medication, and had fewer postsurgical complications.

More recently, a 2005 study conducted at a Pittsburgh hospital focused on the effect sunlight has on patients recovering from surgery. Those who had bright, naturally lit rooms experienced less stress, less pain, and required less medication than those in dimly lit rooms.

Nemours isn’t the only new children’s hospital prescribing sunshine and serenity. The Ann and Robert Lurie Children’s Hospital of Chicago recently launched a study to understand the effect healing spaces have on kids. The study’s laboratory is the hospital’s own Crown Sky Garden, a 5,000-square-foot respite 11 floors above Chicago Avenue. It’s a soaring greenhouse flanked by skyscrapers, and outfitted with bamboo trees, carved wooden benches and an interactive light wall.

“The day after Lurie Children’s opened, I visited the Crown Sky Garden at about 7 o’clock in the evening,” says Bruce Komiske, chief of new hospital design and construction. “I saw a family seated on the wooden benches near the windows — a patient, a mother, and a father huddled around a jigsaw puzzle and their dinner. It looked just like a beautiful family setting in a park.”

But healing spaces are not standard issue at modern hospitals. In fact, some are in danger of being eliminated. Earlier this year, a movement began to save the beloved Prouty Garden at Boston Children’s Hospital, which may become a casualty of the facility’s expansion. A petition was created on Change.org; there are currently more than 4,200 signatures.

“The relief it gives to our long-term patients is a godsend,” writes one supporter, a 22-year volunteer at the hospital. “I have witnessed the comfort and solace it has given so many families.”

“All the amenities at Nemours are as much for the parents as they are the children,” says Donnelly as a yellow tang fish swims past his head. The saltwater tank on the ground floor is provided and maintained by SeaWorld. (Being near Orlando has its perks.)

Last week, the young patients staying at Nemours woke up to a curious sight: Elves dangling outside their windows. The window washing crew donned pointed hats, green tunics, and red and green argyle socks as they worked their squeegees. Sure, they brought a dose of holiday cheer, but more importantly, they’re making sure the sun gets in.