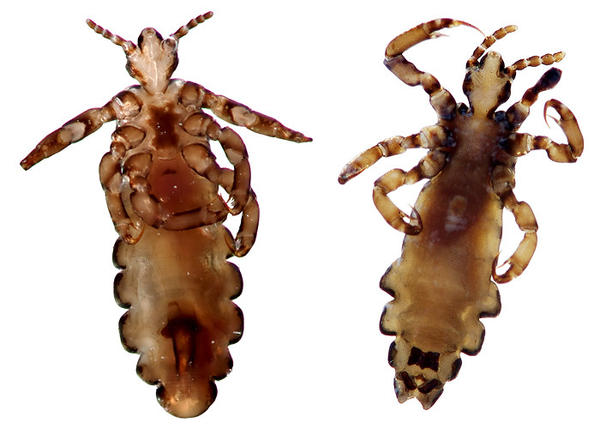 When humans and chimpanzees parted ways about 5 million to 7 million years ago, they took their head lice with them. But since that mutual divergence, those lice have evolved far more rapidly than their primate hosts, according to a new study.

The head-scratching study, published Tuesday in the journal Proceedings of the Royal Society B, was the first to compare genomes of these primates and their blood-sucking parasites, and offers a window into how the pace of evolution can vary considerably, even between co-evolving species.

“What we found out is the lice are in fact evolving faster than the primates across the entire genome,” said Julie Allen, an evolutionary biologist at the University of Illinois at Urbana-Champaign, one of the authors of the paper. “At basic DNA level, they’re evolving about 14 times faster, which is really fast.”

A closer comparison of the DNA that is changing most rapidly also suggests that the same genes may have been crucial to both host and parasite over those millions of years of cohabitation, according to the study.

Geneticists sleuthing out the traces of evolution at the molecular level focus on substitutions among the lettered base pairs (A, C, G, T) that make up the rungs of nuclear DNA. In this case, they scrutinized such substitutions in 1,534 actively coding genes common to all four genomes.

“Those genes have a common ancestor a long, long time ago,” Allen said. “Presumably, they’re important in the function of these organisms. We just don’t know exactly what they do.”

Because different combinations of base pairs can code the same protein, though, not all swaps are created equal. For the lice, a lot of swaps didn’t change the protein, in fact.

But across their genomes, the primates and their irritating guest had an important phenomenon in common, the study found.

“The genes that are evolving faster in the lice are also the ones that are evolving faster in the primates, and those involve changes that actually affect the protein – changes that could make a difference in how the protein functions,” Allen said. That correlation, Allen noted, strongly suggests there was selective pressure applied to both host and parasite at those gene locations.

The simplest explanation for the overall accelerated pace of evolution for the lice species could be that they had more generations in which to experience change – they live just 30 days. But the researchers can’t discount the possibility of selection “relaxation.”

“Lice are really interesting, in that they have really small genomes, have lost their wings and have really reduced eyes,” Allen said. “So, potentially there are a lot of genes that just aren’t that important for them anymore.”

What all these genetic changes have meant to either host or parasite is not well known. Even for “priority” species such as humans and our chimp relatives, scientists don’t fully understand what every gene does and how they interact. Not surprisingly, the genome of lice has not been a high scientific priority, either. No one had even sequenced the chimp lice genome before this study.

And how does one get the chimp lice, exactly? They must be picked off the chimps, a task delegated to veterinarians at the Ngamba Island Chimpanzee Sanctuary in Uganda.