Child itching scalp. Itchy head. Irritated scalp. Or maybe just “the note” from the school nurse. These are the telltale signs that lice may be headed your way. Every year, these wingless parasites infest 6 million to 12 million children ages 3 to 12, according to the Centers for Disease Control and Prevention (CDC). “Kids often get it in September because they are back in school or have recently returned from summer camp,” says Sally Kelly, R.N., a school nurse who makes lice-removal house calls in and around Chatham, New Jersey. Pay special attention when you brush your child’s hair at the beginning of the school year, so you can catch any problems early. Knowing this background info will help you get rid of them if they decide to pay a visit. 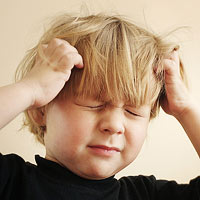 Head lice live only on the human head, feeding on blood several times a day, and must remain close to the scalp to survive. Louse eggs are called nits. Nits are oval-shaped (think of a knot in a thread) and so small that they’re sometime mistaken for dandruff. They’re usually yellow to white. A female louse can lay up to eight eggs per day, firmly cementing them to the hair shaft less than 1 centimeter from the scalp. The eggs hatch in about a week, and their dull-yellow shells remain on the hair shaft.

A newly hatched nymph looks like an adult head louse, but it’s about the size of a pinhead. They become adults in a week, growing to the size of a sesame seed, with six clawed legs. Head lice are tan to grayish-white in color. A louse can live up to 30 days on a child’s head. To survive, it must feed on blood several times each day. Without these “meals,” it will die within 48 hours.

When a child has head lice, he will probably complain of an itchy scalp or will scratch his head, particularly at the nape of his neck, perhaps because it tends to be a warmer part of the scalp. If your school sends home a note about a head-lice outbreak, examine your child’s head, even if he’s not itching. “Kids can itch, because most will develop an allergy to louse saliva,” says Kelly. “But not everyone develops the allergy. My daughter didn’t itch at all. I was just putting her hair in a ponytail, and I saw a bug.” Lice are sensitive to light and will scramble away when you see them. “They crawl fast,” Kelly says. “They’re not like a tick that just sits there, feeding. It’s easier to find the nits, so look for those first. Nits are more likely to be within 1 centimeter of the scalp; if they’re farther from the scalp than that, they’re almost always hatched or dead.