Parenting is looking back while looking forward. Sometimes literally — keeping our eyes on the road, but also on the booster seat. Sometimes metaphorically — gazing at our children and seeing not only where they are, but also where they’ve been and where they’re headed.

So it’s fitting to look back and ahead when reviewing the Year in Parenting. Here are some predictions for 2013, which, as it happens, intersect and overlap in some haphazard and unpredictable ways with what actually happened in 2012. That’s a lot like parenting too — always changing, and ever the same.

1. We will have a serious conversation about Life and Work

I know this with near certainty, because we have already begun. Facebook COOSheryl Sandberg started it off this past spring, declaring that she left work by 5:30 every day to have dinner with her children. Anne Marie Slaughter amped the volume this summer, writing in the Atlantic that the only way all women can have the flexibility that Sandberg so fiercely protects is if the workplace fundamentally changes.

It’s not as if women didn’t know these things for decades, But to have two such high profile women stand up and say the obvious seems to have been a well timed spark at the perfect moment. Both women have books on the way.  Sandberg’s “Lean In: Women, Work and the Will to Lead” is due in March and Slaughter’s is still being written. The cherry on top of the work/life sundae would be if Marissa Mayer announces her goal to make Yahoo! the most family friendly of the Fortune 500 companies.

2.The Best Parents Live In…

Two years ago it was Asian moms. This past year it was French moms — first Pamela Druckerman came out with “Bringing Up Bébé: One American Mother Discovers the Wisdom of French Parenting”, and then, in case we didn’t get the point, Karen Le Billon gave us “French Kids Eat Everything: How Our Family Moved to France, Cured Picky Eating, Banned Snacking, and Discovered 10 Simple Rules for Raising Happy, Healthy Eaters”. Siri tells me there are 204 sovereign states on the planet, making it possible for American publishers to provide us with an atlas of ways to feel inferior for centuries to come.

Personally, I am hoping that the next wave of international parent-worship spotlights Sweden. Children there are educated, polite, multilingual world citizens, and they are, not coincidentally, raised in a country that doesn’t just give lip service to “it takes a village.” (See above conversation about life and work…) If the Swedes become our role models then perhaps we can stop being the only industrialized nation without paid maternity leave. “Raising Swedish Meatballs” anyone? (So far, the 2013 list includes “French Twist: An American Mom’s Experiment in Parisian Parenting” by Catherine Crawford and “Bebe Day by Day: 100 Keys to French Parenting”, a spin-off on the original,  by Pamela Druckerman.)

Yes, that one is easy. After all, whether the Duchess of Cambridge “is or isn’t” has been a story since before the wedding. Now we get new layers: hyperemesis gravidarum! the royal maternity ensemble! will she or won’t she breastfeed? use cloth diapers? have a nanny? lose the baby weight? And what to name the future monarch? Probably not Blue Ivy.

Why will we care? For the same mix of reasons that we cared about Snooki, Adele, and Beyonce, plus all those actresses who weren’t actually pregnant, just photographed after a large brunch. Time was when pregnancy was something to be hidden (Lucille Ball couldn’t say it on TV) and now it is to be strutted and celebrated. At the same time, though, there’s more than a hint of competition. Do we look like that? Shop like that? Parent like that? I’m wagering that will become more so as the world’s most visible mother becomes ever more visible.
4. Some mother will be shamed for the way she looks (probably a celebrity, but that still won’t make it okay.)

This year it was celebrity trainer Tracy Anderson who did the shaming, telling DuJour magazine that it took her but six weeks to return to her pre-pregnancy shape, and then saying “a lot of women use pregnancy as an excuse to let their bodies go.”

Joy Behar joined in, too, saying of Jessica Simpson “Most women who are pregnant are not supposed to gain more than 25 pounds. She looks like she gained a lot more than that.”

I don’t see this changing in 2013. But I do see more women fighting back.

5. Someone will respond to mother-shaming and step up to celebrate mothers for what they are. 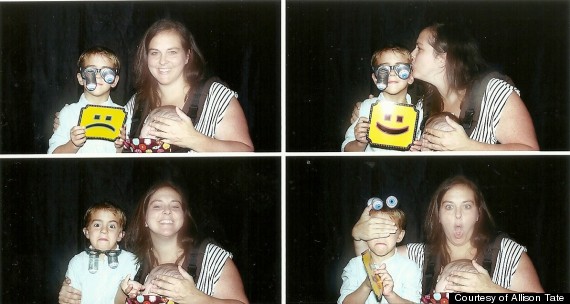 This year Allison Tate led the call, with her post here on HuffPost Parents, “The Mom Stays In The Picture.”  Women have to stop stepping out of frame because “We’re sporting mama bodies and we’re not as young as we used to be,” she wrote. “I am not perfect to look at and I am not perfect to love, but I am perfectly their mother.”

Thousands of you responded by sending us photos of yourselves with your families, and that was a resounding start. But we will need reminders throughout the year if the message is to take hold.

6. A mother will be told not to breastfeed someplace she has every right to be.

This year’s tally includes on Facebook, in the Virginia State Senate, in a classroom at American University, in the Tooky Mills Pub in Hillsborough, New Hampshire, in aspec ad for Oreos and in uniform.

It won’t be pre-chewing food and transferring it into a baby’s mouth, because Alicia Silverstone has been there and done that, but there will be something. And it will be one more sign of a time when too many of us forget to simply be with our children, and feel the need to turn parenting into a trend or a performance art.

8. Something will horrify us.

No one needs a reminder of the images from this year. From a gunman shooting up a movie theater, to a nanny murdering her charges in the bathtub, to the massacre of 20 children and the six adults who could not protect them, it has been (another) wrenching year.

In the aftermath of the unthinkable our instinct is often to turn on the parents of the dead children. “Who takes kids to a midnight movie?” we asked. “Why have children if you are going to leave them with a stranger?”

Sandy Hook was different. Faced with the inescapable reality that it could have been anyone’s six-year-old dropped off for first grade that morning, we banded together, instead of bickering. With no place to hide, no way to pretend that a “good parent” could have saved their child, we began to talk about things that actually might — new ways of thinking about guns, for instance, and about mental illness.

Do I predict that this new solidarity, kindness and action will be the rule in the coming year? No. But I fervently hope.

9. Science will confuse us.

This year, for instance, we read studies linking autism to flu during pregnancy,fever, older fathers, air pollution, genetic mutations and antidepressant runoff in the water. The studies varied dramatically in terms of sample size and trustworthiness, but all of them made headlines.

We can expect the same in 2013, and probably evermore. Parents seek answers they can act on, and yet the things we want answers to have gotten so multifactorial and complex that single solutions are not possible. We will continue to search and facts will continue to both enlighten and elude us.

10. Technology will worry us.

“When we were their age,” none of the fixtures of their lives had been invented yet. No cell phones, no instant access to the world through the internet. This year we flew blind when facing apps like Snapchat and FTC warnings that most of the apps designed for kids are secretly collecting their private information.

I predict we will get better at sorting the danger of new media from the promise this year. As we become more knowledgeable about it ourselves, we can be more confident and authoritative in drawing lines for our children.

We were mentioned a lot this year — at political conventions, and presidential debates, and articles about polling. The Mom vote in particular was the prize to be won.

Historically this attention comes in quadrennial waves, and during the interstitial years parents are essentially ignored. After all, we have rarely stood together as a unified bloc between elections and, until recently there was no reason to think we will do so this time around. But then came Sandy Hook, and now there is talk of a One Million Child March on Washington this year, and some who wonder whether“Mothers Against Guns” could create the same stigma for gun ownership that MADD did for drunk driving.

Do I predict parents will be a monolithic group this coming year? No. But I do think they will louder.

12. Dads will stay in the picture.

For several years now we have declared the coming one to be “The Year of the Dad.”We have been right every time. Men are steadily changing what it means to be a father — valuing life/work balance more than women in many polls, staying homewith children more often, ceding the breadwinner role, blogging about their parenting pride and frustration.

Changes like these are incremental, though. It’s one of Zeno’s paradoxes that space is infinitely divisible — you can keep dividing something in half for eternity, never actually arriving at the endpoint. All the talk about fathers will continue to feel that way — getting closer, but not there yet.

13. We will feel like we are in this a little less alone.

The time is long past when your parenting circle was built of your mother, mother-in-law and sister. With a mouse click we are now able to share and question everything, and we are filling the infinite space with our doubts and our joys. All that sharing can be cacaphonous and confusing. It can also be reassuring — as we learned anew over the past few weeks when we sought hugs not only in real life, but virtually. That’s not just the parenting story of this year, but of this emerging century.