Peppermint (Mentha piperita) is one of hundreds of species in the genus Mentha which also includes spearmint, water mint and forest mint. Peppermint is actually believed to be a naturally occurring hybrid of spearmint and water mint. While some claim peppermint was not hybridized and cultivated until the 18th century in England, peppermint is referenced in ancient texts. The confusion seems to be that it is mentioned interchangeably with spearmint and the generic term mint. Peppermint has a long history of cultivation and has been used in cooking and herbal medicine since about 1500 BC. Until 1696, peppermint was not classified as its own subspecies, but most historians believe it is reasonable to assume that the mint mentioned in many historical texts is peppermint. 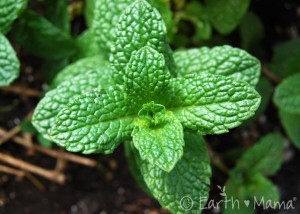 Peppermint is thought to have originated in Northern Africa and the Mediterranean. In the Ebers Papyrus, an ancient Egyptian medical text dating to 1550 BC, mint is listed as calming to stomach pains. Mint was so valued in Egypt that it was used as a form of currency. In the Bible (Luke 11:39) Jesus tells the Pharisees:

But woe unto you, Pharisees! For ye tithe mint and rue and all manner of herbs, and pass over judgment and the love of God: these ought ye to have done, and not to leave the other undone.

In Greek mythology, Minthe was a river nymph in the Cocytus River (one of the five rivers of Hades). When Hades was driving his golden chariot, he came upon Minthe and was about to seduce her when his wife Persephone caught them. Persephone then turned Minthe into a lowly mint plant that people would walk upon. Mint supposedly got its pungent, sweet smell when Hades softened the spell so that when people walked upon his lover they would smell her sweetness. Peppermint gets the descriptor piperitafrom the particular peppery, pungency that distinguishes it from other members of the mint family.

The Roman natural philosopher Pliny wrote of mint and of peppermint in particular that it stimulated the appetite stirring “the mind and appetite to a greedy desire of food.” He also wrote that mint should be bound into a crown around the head in order to stimulate the mind and the soul. Pliny, Hippocrates and Aristotle all considered mint to be a discouragement to procreation, saying that it discouraged sexual intercourse. However, the Greeks said that mint encouraged sexual behavior and forbade its consumption by soldiers in order to maintain control.

Peppermint was eventually introduced to Europe where it also became a popular culinary and medicinal herb. It was mentioned in the Icelandic Pharmacopoeias as early as 1240 AD as an herbal remedy, and gained in popularity over the next two centuries. Monks in the Middle Ages were known to use peppermint as a tooth polisher and during the same period, cheese makers learned that the strong smell of peppermint would keep rats and mice out of the storeroom.

Peppermint appeared as a distinct species in the London Pharmacopoeia in 1721 and was listed as a remedy for treating all manner of ailments from sores, venereal disease, colds and headaches. As peppermint continued to gain in popularity the cultivation increased from just a few acres to several hundred acres.

When European settlers came to America they found that the American Indians were already aware of the importance of mint, though they were growing different species of mint, native to North America. The settlers brought peppermint and other non-native mints with them and they quickly became naturalized and spread.

In North America, peppermint is grown commercially almost exclusively in the north and east from Indiana to New York and the very southernmost areas of Canada. Michigan has the most acres under cultivation in the US, and altogether the US produces about half the world�s peppermint. However, American peppermint oil is considered much inferior to English oil, which is considered the best, followed by French peppermint oil. The difference is typically in the variety; in the US, the black variety is most often grown, while in Europe the more delicate white variety thrives.